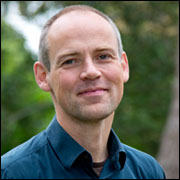 Bo Wegge Laursen (b. 1970) is professor of chemistry and Director of Nano-Science Center at the University of Copenhagen. He obtained his Ph.D. in 2001, work carried out at Risø National Laboratory, Department of Condensed Matter Physics and Chemistry. In 2004 he became affiliated with the Department of Chemistry at the University of Copenhagen as assistant professor, in 2009 as associate professor and in 2013 as full professor. In 2003-4 he was post-doctoral fellow at the University of California, Los Angeles. Bo Wegge Laursen's main research interest lies within the areas of: fluorescents in organic materials, molecular sensors, self-assembly in molecular materials, molecular electronics and graphene. He has published more than 100 papers in peer reviewed scientific journals including several contributions to: Advanced Materials, Angewandte Chemie, Journal of the American Chemical Society and Nature Communications. Bo Wegge Laursen actively seeks to connect his basic research to innovation. He has several fruitful industry collaborations, 7 patents/patent applications, and co-founded two spin out companies: FRS Systems ApS (http://www.frs-systems.com/ ) and KU Dyes (www.ku-dyes.com/ ) where he is CEO.